When men come home from work depleted and needing a place to unwind, or if they want a dedicated space to watch the game with buddies and indulge in male-centric hobbies, they often retire to their “man caves,” a term that came into existence in the 1990s, according to some sources.

Throughout the decades, the desire for a dedicated male space has survived, especially in households shared with a female partner or children. However, gone are the days of the man cave resembling a sports or dive bar, according to Dinah Capshaw, an interior designer in Dallas-Fort Worth.

Capshaw recently completed a “man cave 2.0” for one of her married couple clients. The husband is in oil and gas, and his wife was concerned about his ability to adequately de-stress in their two-bedroom Victory Park condo.

“He’s under a lot of pressure all the time and really needs a place to decompress at the end of the day,” Capshaw recalls the wife saying.

Capshaw answered the call with a hybrid study, bar and game-watching zone for the sports fanatic by converting an unused hallway with large storage closets into a space just for him.

The library now has floor-to-ceiling bookshelves that also double as a hidden door to the rest of the condo. Shelves are embedded with strips of LED lighting that illuminate the rich wood color of the builtins and his collection of books and décor. They’re dimmable as well, to give the space a warm glow in the evening time. “Lighting is so important, it can affect everything,” Capshaw emphasizes. 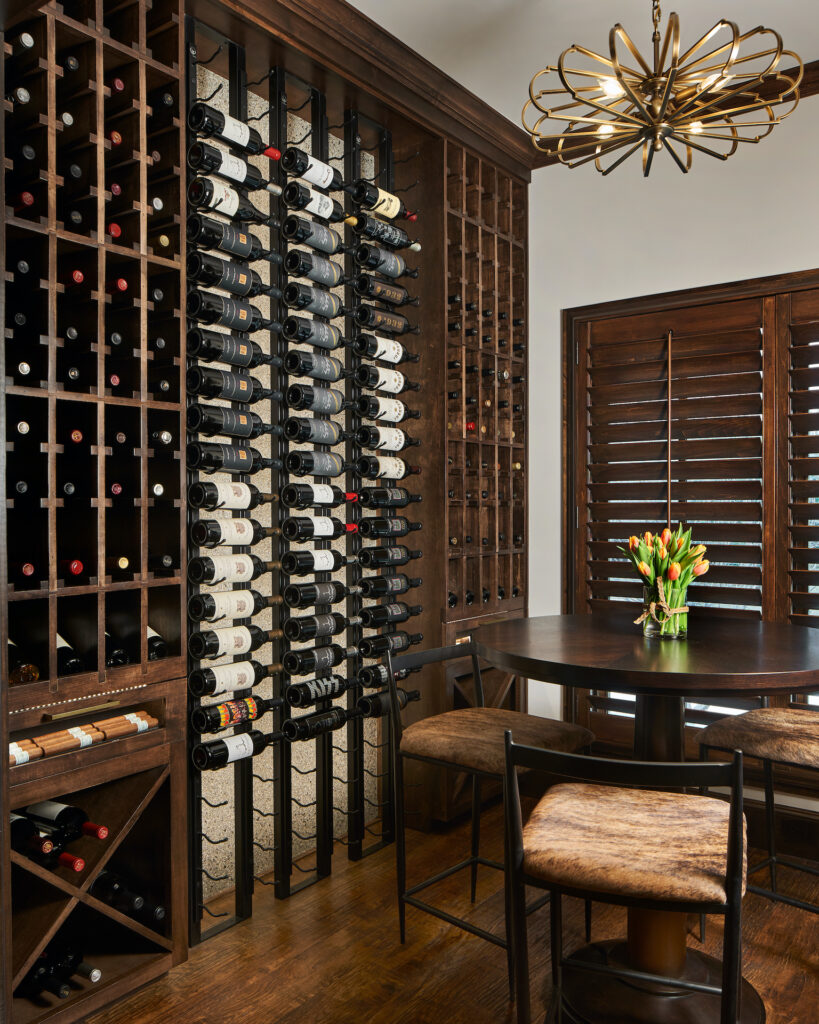 She selected a linen-blend fabric for the wall covering, which adds subtle visual interest. The wall covering is timeless and also functional—she says the thick fabric improves acoustics in the narrow chamber. Completing the picture are a plush Restoration Hardware sofa in dove gray, wine fridges, a kegerator and a TV, painstakingly selected to be the perfect size, so it didn’t overwhelm the narrow 8-by-11-foot library.

On the other end of the size spectrum, local designer Botond Laszlo completed for a divorced male client a five-bedroom manse, the entirety of which could be considered a man cave 2.0. As the client is single, he had no use for a bathtub or second vanity in his enormous master bathroom and instructed Laszlo to remove them during a recent renovation.

“He wanted to make this house exactly how he wants it,” Laszlo comments.

While man caves of yore typically featured fancy media systems with projection screens, arcade games or pool tables, Laszlo is seeing more requests for hybrid bar and entertainment areas that can highlight a client’s craft beer hobby or impressive wine collection. For this client, Laszlo converted an unused study into a wine cellar with built-in humidors and a separate ventilation system.

“It was incredibly complicated. We had to make it airtight and humidity and temperature controlled to keep wine at 55 degrees even when it’s 110 degrees outside,” Laszlo explains. The result is a stunning repository for 500 bottles of wine displayed in floor-to-ceiling wine racks, plus two humidor drawers that hold dozens of cigars each. Wood accents lend a rich warmth to the design.

Laszlo echoes Capshaw’s sentiment that man caves are becoming “much more sophisticated,” but ultimately he says: “It’s your space. The man cave is about all the possibilities within the home that define who you are.”

He sees requests for converting garages, outdoor patios, backyard studios, or even basements in the North, into theaters, music studios and auto shops, or hybrids thereof where clients can work on their hobbies and have a drink with their built-in bar system.

“They’re spaces where they can hide or spaces they can share with others, depending on what they want,” he explains. “It’s really about capturing clients’ individual tastes and needs.”