As we move into the cooler weather and holiday season, my mind wanders to thoughts of home. Usually, my accent gives it away that I’m not from around these parts. Sometimes I jokingly tell people I’m from South Texas. Oddly, they never believe it. So I thought I would take this opportunity of personal reflection and share with you some information about where I am from and how it is a little different from Dallas.

My hometown of Ozsdola is a small town (or village as my wife refers to it) of about 3,500 people. It sits in the valley of the Carpathian Mountains in Transylvania. The region used to be part of Hungary, but after World War I was split off and granted to Romania. There is much more history before it was part of Hungary, but that is for another time and place.
In Ozsdola, houses are built to last forever. Not to say that around Dallas houses are not meant to last or lack structural integrity, but I suspect many houses are now torn down to build something new. The house I grew up in used to be a mill. It was built in 1930 and half of it was used as a grain mill while the other half is where the family lived. The walls were built of 6-inch thick, solid wood with stucco on both sides, on top of 2 meters of stone foundation that is often 20 inches thick. To give you even more perspective, exterior walls on houses around Dallas are made of 2x4s covered with drywall and brick veneer or siding on the outside. 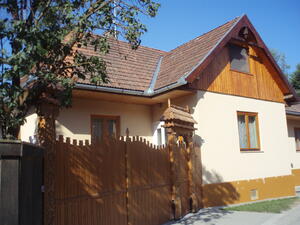 Now, you may think that is just how things used to be built and remember the saying “they don’t make ‘em like they used to”’ and think that new houses in Ozsdola are built differently. Nope. One of my closest childhood friends is building his new house just the same way. It does have some added technological and architectural advances that may not be in the older homes, but the basic building structure is quite the same.

When you look around at the décor of people’s homes in Ozsdola you will notice their personal touches and style, and you will also notice they all have a number of items with a red tulip motif on it. The motif is local to the Székely people. Often it is embroidered on linens so you will see it on things like decorative pillowcases and table clothes.

Similarly, if you visit a home or the market in Budapest, you will see very similar shaped flower motifs but the colors are different. Where we use just red, they use a mixture of bright colors, like a field of wildflowers. In other areas of Hungary, you will again see similar motif, but something slightly altered depending on the region. 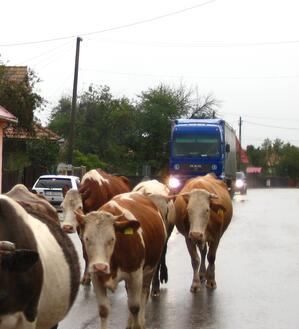 The landscape of Ozsdola is really nothing like what we have here in Dallas. Looking out the window you can see the neighbor’s field in their backyard where they grow a number of vegetables. Off to the side are some chickens and a rooster that is often an extra early alarm clock. When you look beyond that you see a hill that sometimes has the cows and sheep that the shepherd has taken out to graze.

That was one of the many normal sites that took my wife by surprise when she first visited. She was amazed to see that shepherds still take the cows up in the hills during the day to graze and bring them home at night. She laughed at the sounds the sheep were making as the shepherd walked them through the village streets. Now whenever we go back she points out the “cow-pool” instead of “carpool.” The shepherd brings the cows down from the hillside and walks through the village. When the cow gets to its house it waits outside of the gate while the others carry onwards to their homes.

All of these are memories of home that when living there seemed normal. It wasn’t until I moved away that I was really able to appreciate and see the differences. Many of my clients tell me they like MHM’s style because it has a little bit of a modern touch that’s popular in Dallas but also feels like home.

I like to think it’s like my wife and my heritages coming together to build new relationships and homes with all of the great people I’ve met here. I look forward to helping create your dream home where you will building lasting memories with your family.